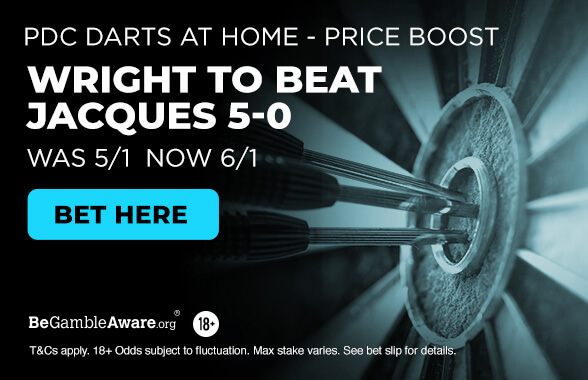 The opening night of the PDC Home Tour will see one of the biggest names in darts step up onto the centre stage as well as some names that you perhaps haven’t heard of. Night One could definitely see some of the biggest upsets of the tournament.

Gerwyn Price Vs Luke Woodhouse looks to be the biggest match of Night Two with the Brit defeating Price last year in Barnsley and narrowly losing 6-5 in Wigan earlier this year. The mystery of this event taking place in players houses could make this a very exciting match. However, don’t discount Rowby-John Rodriguez who has good records against some of the best names in darts but has never beaten Gerwyn Price in 4 attempts. Could this be his first?

Night Three may be the night that interests our readers the least as Dave Chisnall is a massive favourite to win against two opponents he has a fairly decent record against and Jonathan Worsley who he has never faced and is ranked 336th at the moment.

Night Four holds a number of reasons to be excited. Ross Smith is one of just eight players hit a 9-dart finish on a European Tour, after his in 2013, it took 5 years before Michael Van Gerwen hit another. Lisa Ashton is the first female of the tournament and Geert Nentjes will do a lot more than make up the numbers here.

This event will be a nightly league format which will see all four competitors play each other one in matches across nine legs with 32 nights of action and 32 group winners pushing into the second phase of the competition.