When it comes to Football betting there has been a tonne of amazing moments in the Premier League this decade. Whether your favourite was Leicester’s 5000/1 Premier League victory or that magical “Agueerooo!” moment, we believe that everyone has to admit that this decade has been brilliant for the Premier League. Now many pundits have picked their top XI’s for the Premier League: Team of the Decade but at 21.co.uk our Football Betting Tips writers all believe that their XI is the greatest. Therefore, we’ve decided it’s only fair for our three teams to go alongside each other to decide the true Team Of The Decade starting in net with the goalkeeper.

Any formation that has been regularly played in the Premier League is allowed.

Players must have played over 50 games this decade.

MG’s Team of the Decade

I’ve picked a basic 3-5-2 formation for my Team Of The Decade and I’m going to decide a lot of my players due to consistency over the course of the decade rather than a couple of good seasons. Which is why to start things off I’m going with David De Gea in goal, the Spaniard has kept 103 clean sheets despite having mediocre defences in front of him almost every year. However, Joe Hart and Petr Cech made this one of my toughest decisions for this team.

For my back three, I’ll start with Vincent Kompany who in my opinion was the reason behind Manchester City’s four Premier League title’s in this decade. If you take Kompany out of any of their teams, you would 100% see the same impact losing Laporte has for Pep Guardiola in 2019/20. Kompany is a natural-born winner, so I’ll partner him up with another in John Terry. Injuries caught up with Terry in the mid-2010s but his influence on Chelsea’s three Premier League titles are unheard of. Finally, I’m going take Virgil Van Dijk who has revolutionised Liverpool football club and last season changed them from a typical “Goal fest” team into one of the Premier League’s best.

For my two holding midfielders I’ll have N’Golo Kante and Yaya Toure when we talk about duos we dream about playing together, imagine Yaya Toure in his peak alongside a Premier League-winning N’Golo Kante? Unbelievable. On the left-wing, I’d have Eden Hazard because even when Chelsea weren’t winning trophies, Hazard shined and the plaudits never stopped for the Belgian. Now, my last choice was going to be Riyad Mahrez or Mo Salah but finally on the right-wing, I’m going to choose the most professional player in football. James Milner - A winner everywhere he’s been and an attitude to match, when it comes to the ultimate utility man there is no one better than James Milner if we’re honest. Finally, there is only one option when it comes to my attacking midfielder - Kevin De Bruyne one of the greatest players to ever grace the Premier League.

Upfront was possibly the toughest choice of the lot. In the end, I’ve gone with Sergio Aguero and Luis Suarez. In my opinion, the two most naturally gifted strikers in the league, Aguero spends at least a quarter of every season injured but still ends up in the top scorers in the division and Luis Suarez is in my opinion, the most prolific goalscorer of the decade despite only being in the league for three seasons. 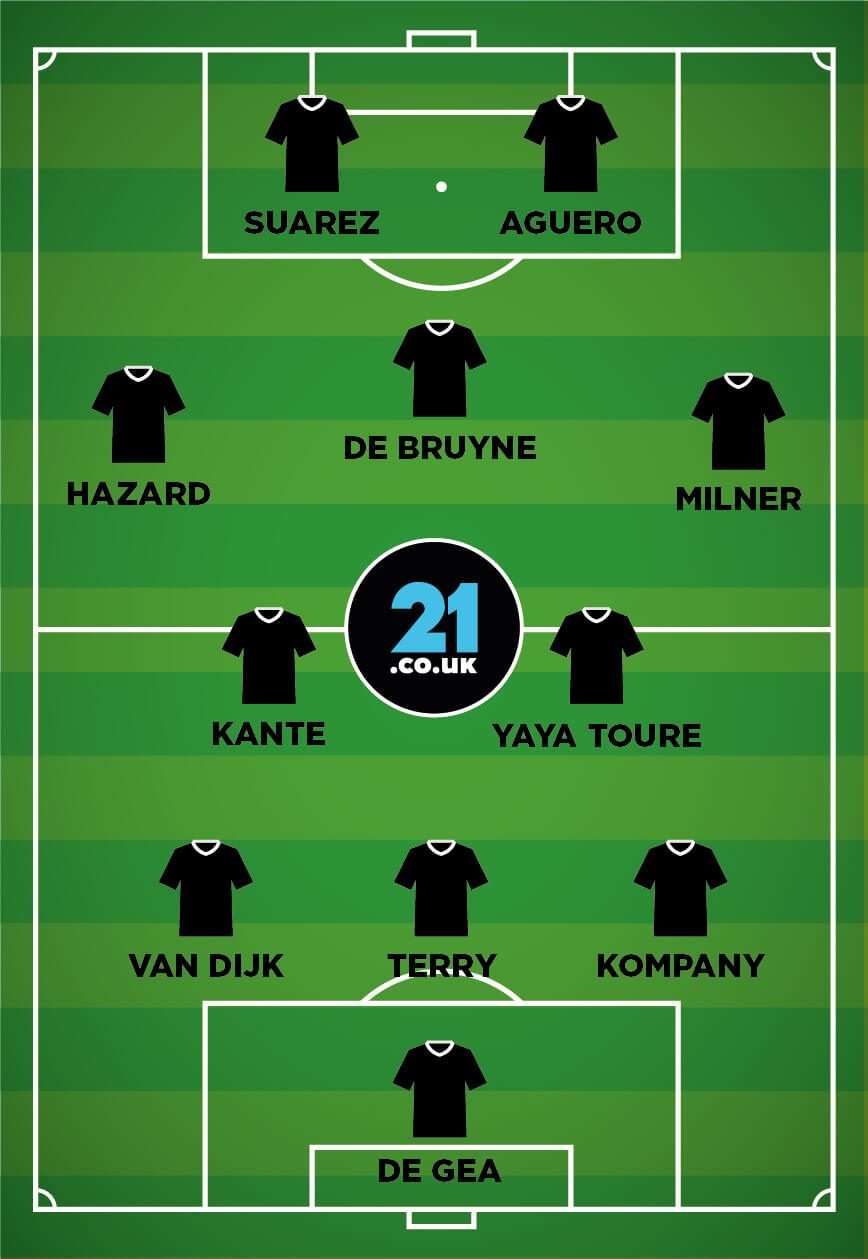 TM‘s Team of the Decade

4-2-3-1 was in vogue halfway through the decade, so that’s the formation I’ve gone with here. Naturally, there were some very difficult decisions along the way, but I’ve tried to go with my head over my heart, turning to cold hard facts and statistics to back me up. Let’s see how that goes. It may be a bit of a surprise to those with shorter memories, but David De Gea has been the standout ‘keeper over the past decade. Others such as Thibault Courtois and Petr Cech had their moments, but the Spaniard made his bow in 2011 and was crucial in Manchester United’s 2012-13 title triumph.

The first of the two centre-backs began the decade at Bolton Wanderers, and ended it at Crystal Palace. Crucially though, Gary Cahill’s seven and a half years at Chelsea were full of exceptional performances and accolades, including two Premier League titles and a Champions League. His centre-back partner has to be Vincent Kompany, and although Virgil van Dijk has staked a recent claim to the position, who can argue against a man who showed exemplary skill to captain Manchester City to four Premier League titles and two FA Cups. Either side of them are the virtually ever-present Leighton Baines - who criminally has won no silverware at Everton - and Branislav Ivanovic - an important player at Chelsea for much of his career.

There are two central midfielders and a number 10 to add to the squad here, with the first player having to be Yaya Toure. Joining in the summer of 2010, the majority of his 230 appearances were of the highest standard, as Toure frequently began attacking moves whilst also popping up with some spectacular goals and important tackles. His partner in the centre, N’Golo Kante, was integral to Leicester City’s unprecedented title success in 2015-16. He’s redefined the role of a box-to-box midfielder, showing pace and skill while also not being afraid to retrieve possession, and continues to impress at Chelsea. Sitting in front of them is another “old-guard” Manchester City player, in the form of David Silva. His left foot might actually be magic, and his creativity and dedication to the cause (in spite of off-field issues) make him a living legend.

The front three are made up of two wide players and a striker. Mo Salah, Sadio Mane, and Raheem Sterling all deserve honourable mentions, but Eden Hazard and Luis Suarez are the wingers I’ve gone with. For obvious reasons, as you’ll see from the image below, I’ve kept Suarez as far away from Ivanovic as possible, but you can’t overlook a player that scored 69 goals in 110 Premier League appearances, and showed true ingenuity in many of his matches. On the other flank, Eden Hazard is quick, inventive, and crucial to any team he’s a part of. At times the ball seems glued to his feet, and his adept with both his right and his left. Finally, while Harry Kane has given him a good challenge, you’d be a lunatic to not have Sergio Aguero at number 9. 174 goals in 254 league games speaks for itself, but a quick glance at his medals collection cements his selection. 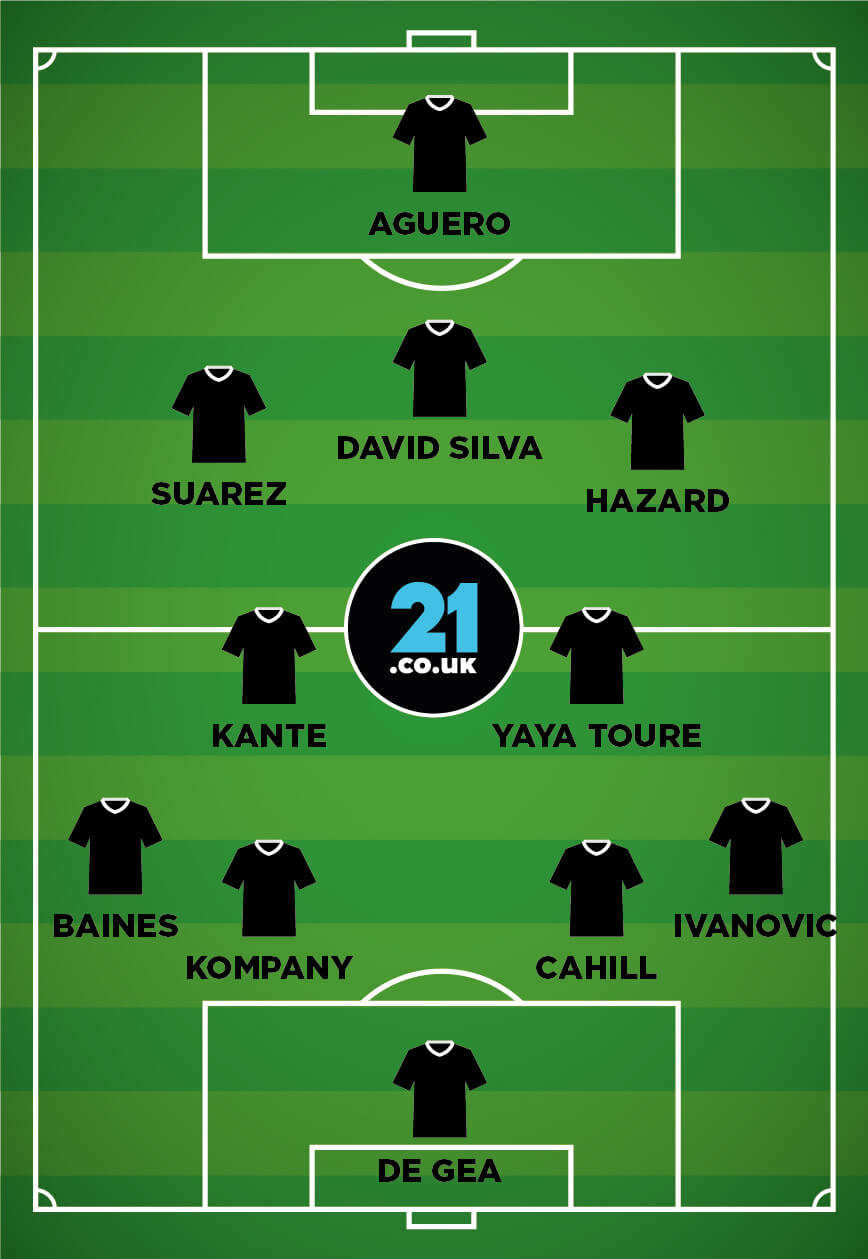 JG’s Team of the Decade

Just like all of the top managers on the planet, I’ve decided to go with the revolutionary 3-4-1-2 formation. As a disclaimer, I’ve based most of these on a multitude of criteria: how influential they were to their sides, consistency, contribution to iconic moments throughout the decade and the trophies that they won. First up, David De Gea in goal is pretty self-explanatory. He was immense in the middle of the decade, even if he has dropped (literally) in recent times.

At the right of a back three is Cesar Azpilicueta, who is now the Chelsea captain after joining in 2012 and winning two Premier League titles. Another captain, leader, legend type that essentially picked himself was Vincent Kompany. To be honest, he could make this team for the goal against Leicester alone, as Gary Neville put it: “where do you want your statue?”. Lastly, without trying to jinx it, it is a future Premier League title winner in Virgil van Dijk. He was a bargain at £75m and is probably the best centre back in the world at the moment.

On the right-wing, this is probably a controversial choice when the likes of Mo Salah and Gareth Bale exist, but I’ve gone for Riyad Mahrez. Winning a number of individual awards in 2016, he was a huge part of Leicester City’s fairytale Premier League title win and continues to perform well at Manchester City. Speaking of Man City, my central midfield partnership know each other very well. Yaya Toure and David Silva played together for years and were incredibly successful. The stats speak for themselves. On the left is Eden Hazard, one of the most talented players to ever grace the Premier League.

Just behind the two strikers is Luis Suarez, who is always biting at the heels (or shoulders) of defenders. A mercurial talent, he was always in the headlines while at Liverpool, but it is for his goals and football genius that he’s included in this team. My first striker is Sergio Aguero, who was probably the first name on the teamsheet here. I swear you’ll never see anything like him ever again. His manager Pep Guardiola has described him as irreplaceable and after scoring 174 Premier League goals it’s easy to see why. Lastly, it’s…………. Jamie Vardy. The Fox in the Box has been incredible for the 2015/16 league winners and continues to bang in the goals coming up to his 33rd birthday. 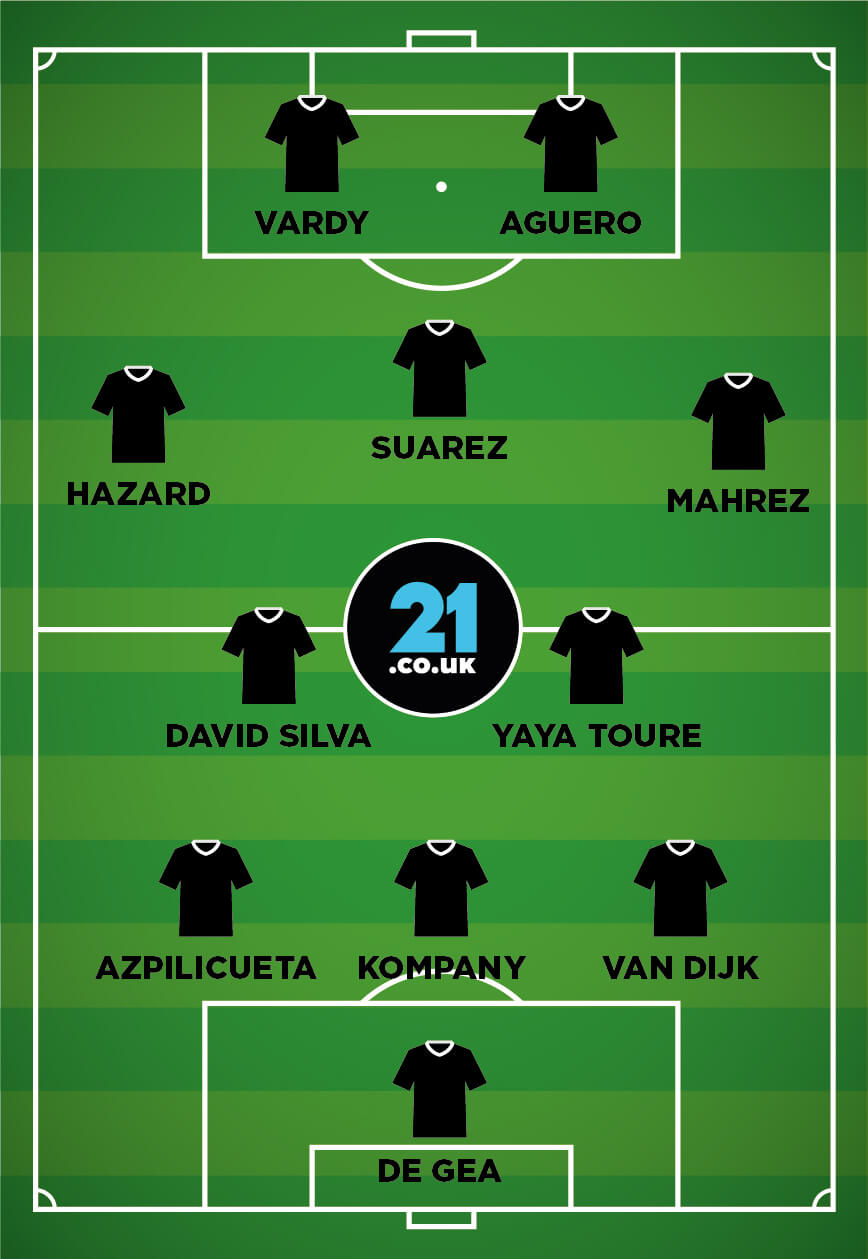 So, there you have it. Our three experts have provided their opinions on the Premier League Team Of The Decade, let us know your thoughts on Twitter @21couk

Alternatively, you can check out our NBA Betting Tips or our NFL Betting Tips to find all our predictions from across the pond!