21.co.uk might be famous for the best casino games but in October 2018 we launched our sportsbook which added online betting to our ever-growing portfolio. Having the choice to bet on live sports might seem appealing but, for readers more accustomed to the world of online casino UK and spinning popular slots online where do you begin? That’s where our betting tips come into play. Our resident tipsters will be here throughout the year to provide you with sports betting tips on all the major events and you can find them right here.

We start off our Betting Tips for Monday with some Cricket Betting where England despite a rocky start to their innings are favourites to beat the West Indies however, they need a suitable target to declare and then eliminate the West Indies batsmen. Everybody favors England but the West Indies should hold out for a draw in the second test.

Before you know the conclusion on the Cricket you should cast your eye onto the Horse Racing Betting, particularly to York where Jovial catches the eye at 4/1 in the William Hill Summer Fillies' Stakes, his main opposition is Miss Celestial who has lost on her last three 6f races while Jovial has won all of his last three with relative ease.

Finally, we finish up at what our Football expert has deemed as his Tip of the week as he is backing Brighton to beat Newcastle at a small price of ⅚. Newcastle have avoided defeat just five times in 13 games without Allan Saint Maximin, they also struggle against high pressure teams so they will likely play straight into Brightons hands.

We're heading into the weekend of Ascot and as we have had some fantastic results this week we're hoping for something along the same result for Friday and Saturday's action!

Check out our Football Betting Tips, this week we have previews for this weekends Premier League, La Liga and Bundesliga! Who wins the Merseyside Derby? Can Sevilla put a dint in Barcelona's title plans and who will win the battle for the runner up spot in the Bundesliga - Dortmund or Leipzig? Find out at 21.co.uk!

We're into the final few rounds of group stage action in the PDC Home Tour. Which players will book their place in the knockout stages, find out here at 21.co.uk

Can Anthony Smith steamroll beyond Glover Teixeira on his way to the Light Heavyweight title? Its a fight that could go either way but find our prediction at 21.co.uk.

The teams in the playoffs are all but confirmed, but the seedings are still wide open. Some huge games are played this week, including Boston Celtics @ Milwaukee Bucks, and 21.co.uk has all the NBA betting tips.

After predicting losses for Liverpool, Spurs and Chelsea last week, our tipster takes to the betting slip for the section leg of the Round of 16.

Tyson Fury has a significant weight advantage over his American opponent but how will the change in gameplan effect Tyson Fury?

Only Michael Van Gerwen has won both his opening games this season. Can Nathan Aspinall avenge his World Championship semi-final defeat in Cardiff and hand the Dutchman his first defeat of the campaign.

The T20 World Cup is quickly approaching for England, can they pick up an important victory against Group 2 opponents South Africa before they face Pakistan and Australia?

21.co.uk resident NFL tipster makes their call on the biggest game of any sport in 2020, the Kansas City Chiefs take on the San Francisco 49ers and we're expecting one of the best Super Bowls of all time!

The Cheltenham Festival is just around the corner so we're heading back to Gloucester for Cheltenham Trails weekend.

Despite the controversy surrounding the conditions in Australia, we can expect the Australian Open to go ahead. Find our tips for the event here!

From Australia to the USA, Formula One has travelled across the globe in 2019 and despite a record-setting points total for Lewis Hamilton. The 2019 season was a very memorable one, find our season review here!

Premier League - Team of the Decade

Fresh off the Winter Break our three Football experts release their Premier League Team of the Decades. If one thing was every guaranteed is that there were tonnes of players who could have potentially made it into these three teams, find out who did here!

Are you looking to expand your betting knowledge? Take a look at our guide to find out exactly what is an each way bet.

FunPlus Phoenix take on G2 in the battle for the League of Legends World Championship Title. See what our 21.co.uk eSports Betting Tips tipster has to say about this clash between two titans of the eSports world.

21.co.uk take a look at the latest NHL betting tips ahead of the Bruins @ Canadiens on Monday 17th December 2018. 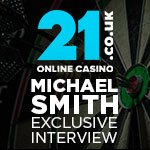 After his victory at the 21.co.uk Shanghai Darts Masters, Michael Smith spoke to 21.co.uk online casino to reflect on the tournament. 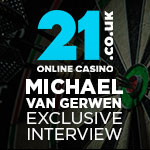 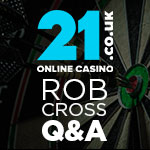 Ahead of his debut appearance at the Shanghai Darts Masters, 21.co.uk spoke to Rob Cross about how he's feeling coming into the tournament 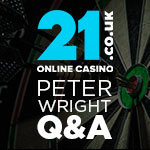 21.co.uk caught up with darts player Peter Wright ahead of his appearance at the 2018 Shanghai Darts Masters to discuss his preparation for the tournament. 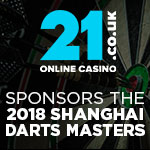 21.co.uk online casino has become the official UK sponsors of the 2018 Shanghai Darts Masters. The PDC are bringing defending champion Michael van Gerwen as well as other big profile players. 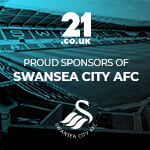 21.co.uk are proud to announce our sponsorship of Swansea City for the 2018/19 Championship season. 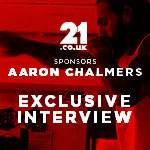 21.co.uk interviews MMA and reality TV star Aaron Chalmers in the run up to his Bellator 200 debut. 'The Joker' lifts the lid on his MMA journey and how jealousy is taking over the world. 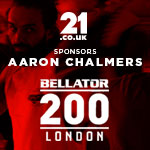 21.co.uk swaps the roulette wheel for the octagon. The best online casino on the market has agreed a sponsorship deal with Aaron Chalmers, as he tries to take his fourth straight win.